An Island in a Sea of Gentrification 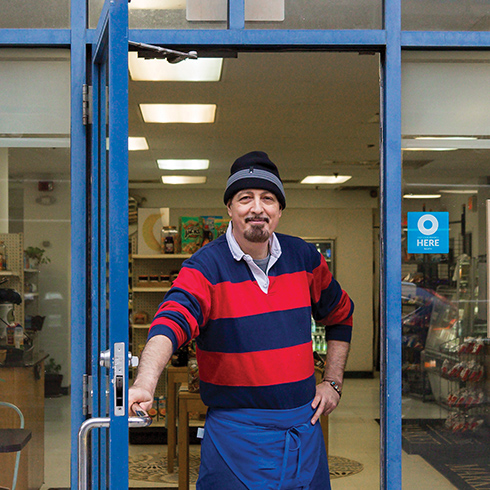 The financial and legal complexity of this deal can’t be overstated. BlueHub’s ability to accommodate all those details was critical. And they were very quick. Everything else about this project was so complicated, it was great to have a partner that was uncomplicated.”
Thacher Tiffany
Director of Development, Beacon Communities
Eddie greets people with a smile at Ninth Square Market and Deli, one of Ninth Square’s 23 retail establishments.

You were brought in to restabilize Ninth Square Residences. Why?

Ninth Square was built in 1994 and had really contributed to the life of New Haven. But it had become financially unstable over the last few years, and as a result, the property had gotten old, with aging systems and deferred maintenance. In addition to taking over management, we were able to raise critical capital dollars and renegotiate terms with existing lenders and with the city to make this development feasible. ‍

BlueHub made this transaction possible. They were able to offer flexible financing unavailable from traditional sources to close the gap and ensure that the project was successful. They were incented by our long-term partnership and their deep commitment to investing in affordable housing and communities — but they succeeded because they are very sophisticated lenders.

$1,900,000
loan to help finance the acquisition, refinancing and renovation of an existing 6-building mixed-use property

Why is Ninth Square so important?

It’s a true urban development with mixed uses and mixed income. It has 335 apartment units, 56% of which are affordable housing; the rest are market rate. It’s in a part of the city that has seen a lot of growth in market rate housing. As rents are increasing, Ninth Square is a great asset for lower-income people to be able to stay in the neighborhood.

It is also really very centrally located, with fantastic access to multiple train stations and bus routes, giving tenants great access to employment and services beyond the New Haven area. This is increasingly important as families have dual incomes; one person may work in New Haven while another shoots off to Stamford or Hartford. ‍

There is retail, too?

Yes, 23 retail spaces totaling just under 50,000 square feet. That’s a lot of retail! It is an amenity for the residents, but it also serves New Haven and the region more broadly. It has to serve all three in order to be really successful. We’ll do everything we can to invest in the retail tenants to make sure they are successful, so it becomes a destination and helps serve the community better.