Two Months to Get Out. Or a Lifetime to Stay.

Kathleen and Dan S.
Rhode Island
When a 55% pay cut and cancer collided, Kathleen S. had to fight to save her family home. Then she found SUN. 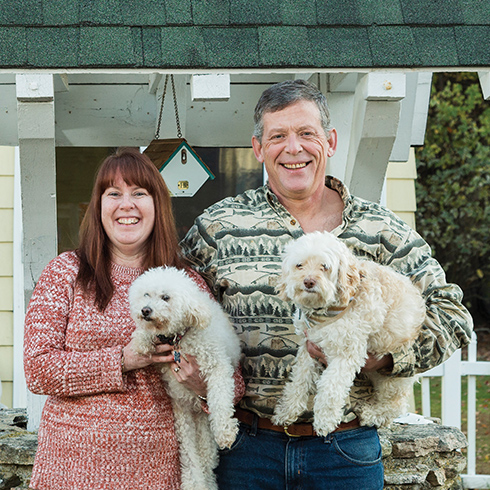 It was a huge weight lifted off our shoulders. I don’t know what we would have done without SUN.”
Kathleen S.
SUN borrower

Your husband had a business he sold?

A. Yes, he had a bread-delivery route that he ran for nine years, and I managed all the financials. Then a larger company bought him out. Dan decided to go to work for a local bread company; he took a 55% pay cut and I was out of a job. I didn’t want a full-time job because the four kids were still at home, so I got into substitute teaching. We were spending the money from the sale to make ends meet. It went away pretty quickly.

And then you got sick?

A. I was battling skin cancer; I had 20 surgeries. I ended up with cervical cancer on top of that. Dan was laid off for eight weeks, and during that time I had a surgery that cost $50,000. At first, state insurance paid for everything. But then they saw that Dan was back at work, so they retracted their payment, because we had health insurance. But, of course, the insurance we had through work wouldn’t pay, because he in fact wasn’t employed at the time of the surgery. By the time we got an answer from them, the case was too old for anyone at the state to pay attention to.

So then the hospital started garnishing your wages?

A. Yes. I had gotten a job that was 100% commission. So they didn’t garnish a percentage. They took everything. It was awful. Then Dan started getting garnishments too. And we started falling behind on our mortgage. You don’t think you can be scared as an adult, but it’s scary.

How did you find SUN?

A. We tried to do a modification, but our mortgage company turned us down. Our house was upside down, because we’re near the airport. We owed $380,000, but it was appraised (at the time) for $190,000. So we took bankruptcy. That was December 12, and the auction was scheduled for February. I wasn’t expecting it to be that fast. The mortgage company recommended Rhode Island Housing, and they recommended SUN. The auction date got put off because we were starting to work with SUN. We wanted a plan B. We were looking for a rental, but we weren’t good candidates. SUN really was our only hope.

We bought our house back on September 23 — the same day that we bought it 15 years ago. When we came back from the closing, Dan went out to the back yard and sat in an Adirondack chair, looking at the house. He sat for a long time, then came in with tears in his eyes. “I don’t know what I would have done if we’d lost our house.”

Read Next: A Decade of SUN