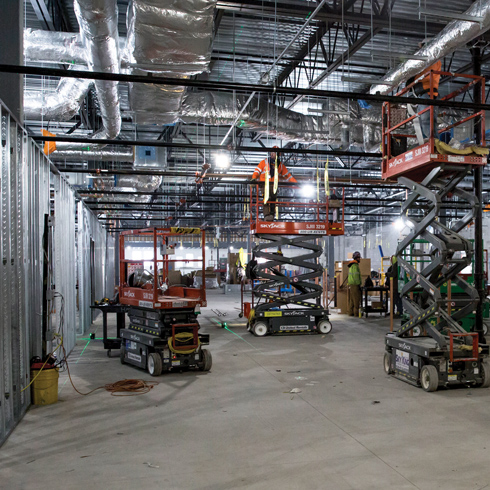 What was the impetus behind Amped Kitchens?

B. We saw the changing nature of food production. Consumers are interested in healthier foods — and in locally produced foods — for reasons from ethical concerns to dietary restrictions to a desire for fewer additives and less processing.

M. We met countless small food businesses who were trying to have an impact on regional food systems, and they all described a similar story: They would start their business, get traction, get a big potential order, then hit a wall because they were working in a borrowed kitchen and didn’t have the infrastructure to satisfy their production requirements.

And you solve that?

M. If one of our tenants suddenly gets a giant order, they can say yes, because they know we’ve got storage space for their raw ingredients as well as their finished products, we’ve got packing areas where they can assemble their product and put it on pallets, we’ve got loading docks — and we’ve got a staff of eight to 12 people who have food-handler cards and who know how to drive a forklift.

Why focus on food?

M. The food industry is an incredibly important part of every region’s economic vitality, representing billions of dollars a year. But when people look at economic development, they often think about lowering barriers to entry. The challenge in the food world is that a lot of the barriers are there to protect public health, so lowering them isn’t a good strategy. We enable smaller companies to comply with standards faster and for less money than they could do on their own.

And even those small companies employ a lot of people?

M. Yes! Amped Kitchens has turned out to be a jobs generator. In our first LA location the tenants employ 200-300 people. Our second LA location is on track for similar employment numbers, and we anticipate the same in Chicago. These are good jobs available to people without college degrees, jobs that often provide opportunities for advancement.

And that job creation was one of the drivers for BlueHub.

M. Oh man, BlueHub’s the best! Our joke with our first project was that Brian and I were developers without a big balance sheet, building a project without comparables, for tenants without credit. That is basically “three strikes and you’re out” in terms of financing a deal. It took financing partners who had a really special vision to make this a reality. And BlueHub has been an incredible partner in helping us structure these deals in a way that recognizes their innovative nature.